The Merchant of Venice, B1r

This page draws attention to the nature of editorial work in producing scholarly editions of early modern works. Letters highlighted in blue indicate modernizations of old-style letterforms from the sixteenth and seventeenth centuries, most commonly the long-s character (ſ) or the substitution of "u" where modern spelling uses "v." Characters or words highlighted in purple indicate modernized spellings of words, most commonly in the removal of the letter "e" from the end of a word (e.g. changing "indeede" to "indeed"). Words highlighted in green indicate modernizations of anachronistic words, such as the substitution of "has" for "hath." Finally, words highlighted in red indicate suspected errors or happenstance inconsistencies, in the printing of the play—see, for example, the italicized "I" in "Italian" at the bottom of the page.

The coloring of these choices draws attention not only to the extent of editorial work in building modern editions, but also in the subjective nature of select decisions. For example, some editors may disagree on this page's distinction between anachronistic spellings and anachronistic words. In modernizing all anachronisms, as this page does, the distinction may be moot. But what if one editor wishes to retain anachronistic words, while modernizing all spellings? Editors and scholars may differ on where "hath" falls in this division. A greater degree of interpretation is necessary in the diagnosis of printing errors. For instance, are all of the "I"s in Portia's last bit of dialogue purposefully italicized, or are some erroneous, much as the "I" in "Italian" almost certainly is? The colorless bolding of "u" in "Fauconbridge" reflects this potential indetermination—is it meant to be "Falconbridge," "Favconbridge," or Fauconbridge," and if one of the former too is the use of "u" an anachronism or error? 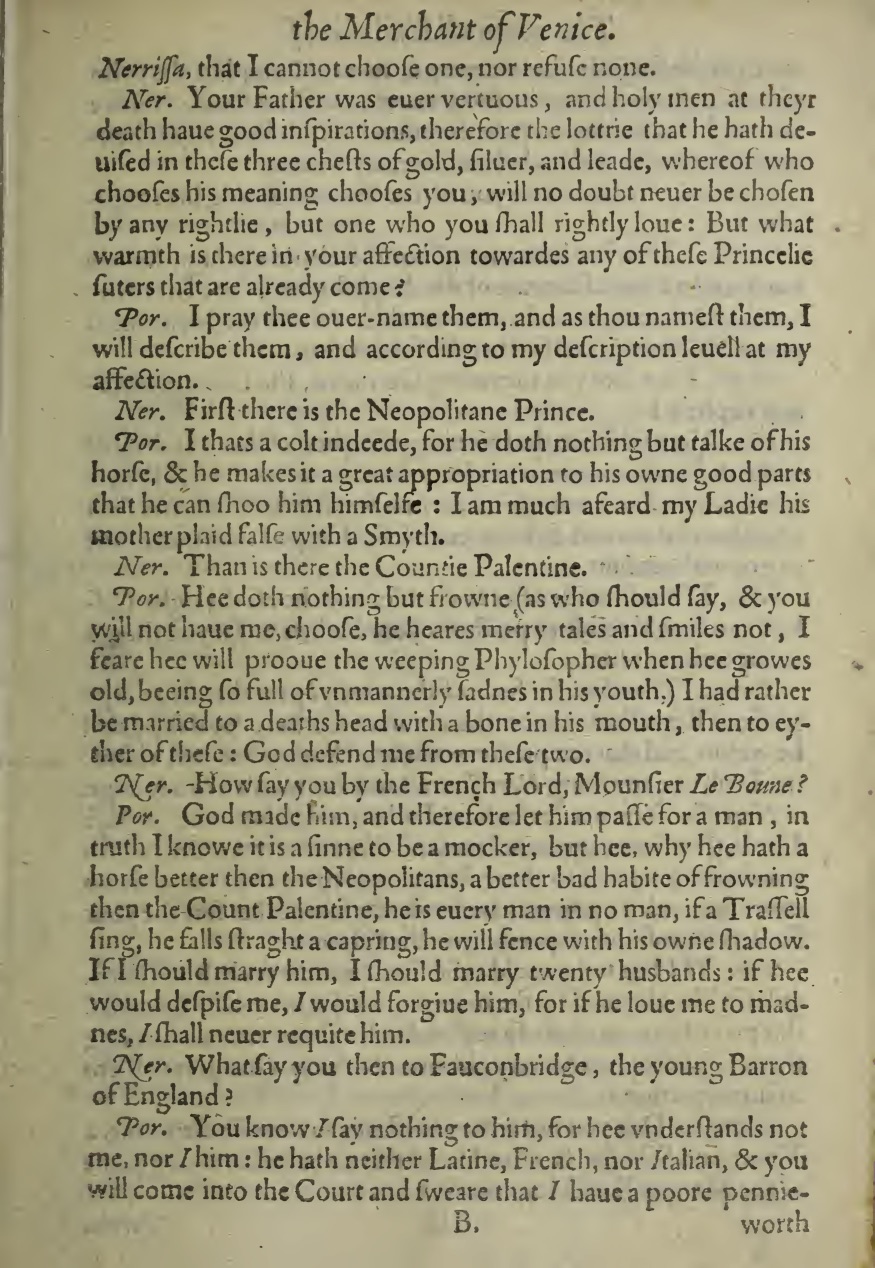 Nerissa, that I cannot choose one, nor refuse none.

Ner. Your father was ever virtuous, and holy men at their death have good inspirations, therefore the lottery that he has devised in these three chests of gold, silver, and lead, by which who chooses his meaning chooses you, will no doubt never be chosen by any rightlie, but one who you shall rightly love: But what warmth is there in your affection towards any of these Princely suitors that are already come?

Por. I pray you go over their names, and as you name them, I will describe them, and according to my description, guess at my affection.

Ner. First there is the Neapolitan Prince.

Por. I that's a colt indeed, for he does nothing but talk of his horse, & he makes it a great appropriation to his own good parts that he can show him himself: I am much afraid my Lady his mother played false with a Smith.

Ner. Then is there the Countie Palentine.

Por. He does nothing but frown (as who should say, & you will not have me, choose, he hears merry tales and smiles not, I fear he will prove the weeping Philosopher when he grows old, being so full of unmannerly sadness in his youth,) I had rather be married to a deaths head with a bone in his mouth, than to either of these: God defend me from these two.

Ner. How say you by the French Lord, Monsier Le Boune?

Por. God made him, and therefore let him passe for a man, in truth I know it is a sin to be a mocker, but he, why he has a horse better than the Neapolitans Prince, a better bad habit of frowning than the Count Palentine, he is every man in no man, if a Trassell sing, he falls straight a capring, he will fence with his own shadow. If I should marry him, I should marry twenty husbands: if he would despise me I would forgive him, for if he love me to madness, I shall never requite him.

Ner. What say you then to Fauconbridge, the young Barron of England?

Por. You know I say nothing to him, for he understands not me, nor I him: he has neither Latin, French, nor Italian, & you will come into the Court and swear that I haue a poor pennie-